The GHOST project by French artist Mitch Brezounek questions the place and the meaning of Soviet monuments on EU territory. The artist will lead us into a fictional world, blending digital art and historical facts. The inspiration behind GHOST is the collision between former Soviet domination in Bulgaria and the country’s current affiliation and vision for the future. Torn between the present and the past, member of the EU since 2007, Bulgaria still hosts 186 Red Army monuments.

Within this project, Mitch Brezounek is digitally reimagining 12 Soviet Army monuments in Bulgaria. The GHOST project will be launched on September 9, 2022, with the website announcement, the publication of the first NFT from a collection of 12, and the opening of the THE GHOST IS HERE exhibition in Plovdiv, Bulgaria.

12 is not a random number. Twelve are the stars on the EU flag. Twelve is also the number of the Soviet Army monuments that are transformed digitally within the GHOST project. Between September 9 and November 9, 2022, the entire collection of 12 NFTs will be released.

9 is not a random date. The GHOST project will be developed between these two significant dates: September 9 and November 9. September 9, 1944, marks the beginning of the pro-soviet communist regime in Bulgaria. November 9, 1989, is the date of the fall of the Berlin wall and the collapse of Soviet domination in Eastern Europe. The second part of the project will escalate into 4 special collections of NFTs and 20 single NFTs, that will be released on November 9, 2022. 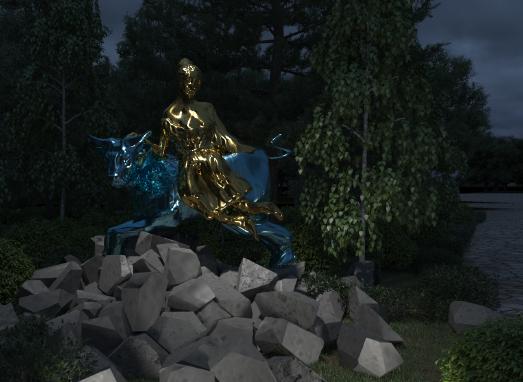 The NFT collections will be available for purchase via GHOST’s website by collectors worldwide.

70% of the proceeds, generated by the NFT sales, will be dedicated to supporting Ukrainian artists and cultural events in Ukraine, as well as to helping the Bulgarian independent art scene. 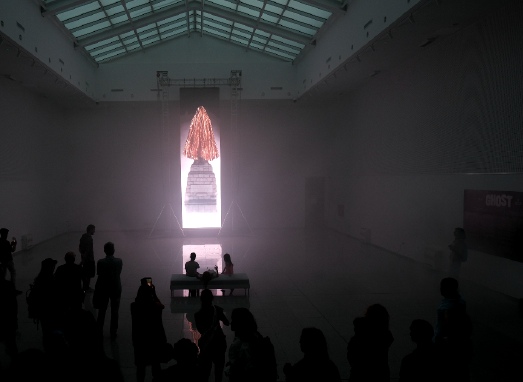 On September 9, the THE GHOST IS HERE exhibition will be opened in Plovdiv - the second largest city in Bulgaria, one of the oldest ones in Europe, and a former European Capital of Culture (2019).

For the first time, with this exhibition, Mitch Brezounek will explore the digital world by creating works in 3D video format - an artistic approach that will allow him to simulate interventions on existing monuments. The public will experience part of the digital interventions on the 12 Soviet monuments through 3D video animations that will challenge the long-lasting perception of the monuments and the message they carry.

The exhibition’s centerpiece will represent an almost real-size 3D animation, portraying the Alyosha Soviet monument in Plovdiv, as well as more 3D artworks recreating other Red Army monuments in Bulgaria. The crowning component of the exhibition is a three-dimensional digital map that frames the artist’s idea and unifies all the elements. The map metaphorically represents the two “faces” of Bulgaria. On one side, the map reflects the strategic locations of Soviet monuments and their hidden messages. On its other side, with the 12 stars on the EU flag placed on the same locations, the map reflects the present - Bulgaria’s membership in the Union. It is by bringing these two conflicting mindsets together, that the artist enables the public to reflect on the past and the present.

Every day the people in Plovdiv are “observed” by this giant Soviet soldier statue (Alyosha) that towers above the city as its guardian. Because of its size and location, the statue of the Red Army soldier is always present in people’s minds. The issue with all these similar monuments around Bulgaria is that the Red army, presented as a liberator by the communist propaganda, in reality, occupied and devastated the country between 1944 and 1947. The intention is to transform the monument (very well preserved and carefully looked after) in a way that reflects reality. Mitch Brezounek

Through the project and the exhibition, Mitch Brezounek will unveil a new cultural symbol, both European and international, a symbol of truth, blending historical facts, digital art, reality, and fiction.

The next part of the GHOST project is a physical transformation of the Alyosha monument in Plovdiv into a giant ghost figure. This transformation will be achieved by covering the statue with 100m2 of golden fabrics.

The first physical intervention is planned to be realized in springtime 2023.

During WW2 the relationship between Bulgaria and the Soviet Union was peaceful even though Bulgaria was an ally of Germany. Later on, in September 1944 the Soviets occupied the country with an army of 248 000 soldiers. For the next 3 years, 75% of the country’s national revenue is invested in the sustainment of the army. Overall, 600 000 Soviet soldiers passed through Bulgaria during this period.

There was no fighting between the occupying army and the Bulgarians. However, communist propaganda declared the occupation a liberation.

Under Soviet demand, the country was covered with numerous monuments of Soviet soldiers presented as heroes. All of those 186 monuments have not been touched until this very day.