Online exhibition: THE GHOST IS HERE

The multi-layered exhibition THE GHOST IS HERE by Mitch Brezounek, merging historical storytelling and digital arts, is having its virtual presentation between September 28 and October 9 2022. In his solo show, Mitch Brezounek questions the repetition of history in Europe by creating virtual 3D interventions on 12 Soviet army monuments in Bulgaria. 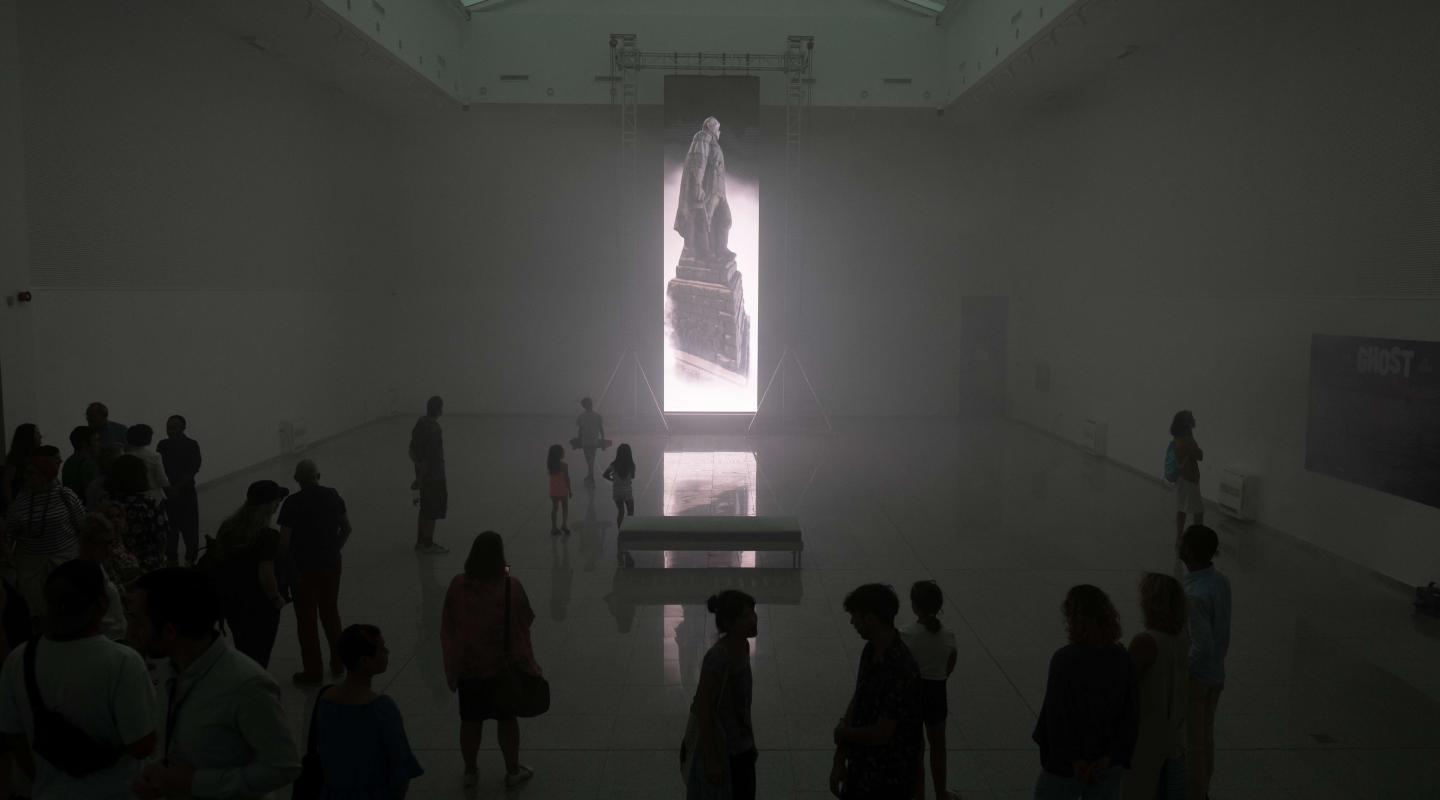 For the creation of his artworks, Brezounek works in collaboration with prof. Evelina Kelbecheva - prominent Bulgarian historian and researcher of the communist past of the country. She is also the author of the exhibition’s historical texts, providing the necessary context and references. For the production of the videos, the artits is also collaborating with the 3D generalist Darky.

THE GHOST IS HERE virtual exhibition is part of the authors’ larger art project - GHOST - bringing forward the objective of raising funds for the Ukrainian independent art scene with a launch of monuments’ interventions NFT collection.

The first mint of the NFT collection - GHOST - went live on September 9, and the second and third NFTs from the collection - LIGHT AND DUST and BOTTLENECK, are released with the online exhibition opening on September 28.

THE GHOST IS HERE exhibition was first presented on September 9 with a physical show in Plovdiv, Bulgaria - the city Brezounek is currently based in. The second part of the exhibition, featuring an AR experience, will be presented in Sofia in November.

I believe that we need to find a new, constructive way to reflect on our past and present. Each of the artistically-recreated monuments tells its own story. Hopefully, these stories will inspire us all to look at our collective history differently. Can we learn from the missteps of the past and shape a better future? The ghost is here to remind us that history repeats itself. - said Mitch Brezounek.

The collision between former Soviet domination and Bulgaria’s current vision of the future is the main inspiration behind the project. After World War II, the country was covered with Soviet war memorials, dedicated to the Red army that occupied the country.

To this day, Bulgaria remains torn between its past and present and continues to host 186 Soviet Army memorials. In times when similar monuments around Eastern Europe are being destroyed, Mitch Brezounek is prompting viewers to consider why and how these monuments were erected in the first place.

For the first time in this project, the artist explores the digital world by creating artworks in 3D video format, an approach that artistically allows him to simulate interventions on existing monuments.

Viewers can experience the digital interventions made on the monuments via the 3D artworks, which evoke the ever-present perception of those memorials and the underlying narratives they convey.

The number of the recreated monuments is not randomly chosen. 12 is the number of the stars on the EU flag, which is also represented as the final component of the exhibition - a 3D virtual map, showing the “two faces of Bulgaria” - a NATO member and a member of the European Union since 2007, that to this day preserves numerous Soviet war memorials.

During the Second World War, the Soviet Union and Bulgaria had peaceful relations, although the country was an ally of Germany. However, in September 1944, the Soviets began occupying Bulgaria with an army of 248,000 soldiers. Over the next 3 years, 75% of the national revenue of the country was allocated to the upkeep of the Soviet army. In total, 600,000 Red army soldiers passed through Bulgaria over this period. No military hostilities took place between the occupying army and the Bulgarians. Nevertheless, the communist propaganda proclaimed the occupation a liberation, and under Soviet demand, the country was covered with a great number of memorials depicting Soviet soldiers as heroes. Today, Bulgaria, a member of NATO and the EU, is still playing host to 186 monuments commemorating the Red Army.